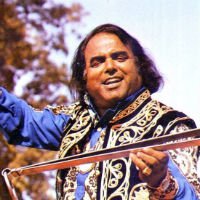 Alam Lohar was born in the small village of Aach Goach outside Gujrat, Punjab, into a family of blacksmiths. He was gifted with a melodious voice and began singing as a child. Strongly attracted to music, he took little interest in his studies and dropped out of school to pursue a singing career, much to the dismay of his father, until Malik Shah, his spiritual guide, intervened on his behalf. Once he achieved the freedom to sing, Alam Lohar developed a new style of singing the Punjabi warm, an epic or folk tale. He is famous for his rendition of Waris Shah’s Heer, which he has memorized in 36 styles and forms. He recorded his first album at the age of 13 and has outsold all other singers in Pakistan, with 5,000 albums to his credit. Alam Lohar organized a full-fledged theatre with a complete orchestra. His troupe toured all of Punjab for religious and seasonal festivals. He also travelled several times to the United Kingdom at his own expense to perform for Pakistanis living overseas, who were delighted by his colourful clothes and thrilling voice, traditional chimta in hand.