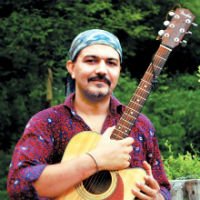 Arieb's musical journey started as a child when he discovered that when he expressed himself vocally, people would pay attention. According to him the early folk and classical music he listened to influenced his later love for traditional music. He picked up the guitar in his teens as a simple acoustic accompaniment for his voice. Always nurturing a love for poets of the Sufi and humanist tradition, Arieb has now found an expression that he can proudly call his own. His first album was Wajj which includes the immortal lyrics of Bhulleh Shah, Khwaja Ghulam Farid, and Mian Mohammad Baksh, as well as more contemporary lyrics by Sarmad Sehbai. Arieb is currently finishing his next album.