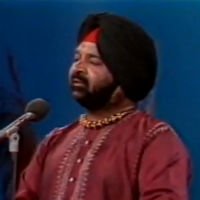 Asa Singh Mastana was a Punjabi Musician and singer, best known for lending his voice to the hit Bollywood film Heer. His well-known songs, among others “Doli Charhdiyan Marian” and “Kali teri gut”, have served as templates for later Punjabi musicians. He was mostly paired with Surinder Kaur or Prakash Kaur for singing many old folk songs of Punjab. He even sang at marriages. Asa singh Mastana should not be confused with Asha Singh, who is a young punjabi bhangra artist from New York.