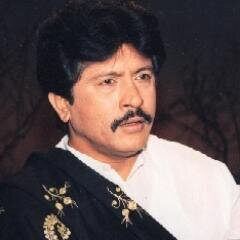 Attaullah Khan Essakhilvi is a well known folk singer and poet of Pakistan. He has a world record of the highest number of audio albums ever released by a singer. He is traditionally considered a Siraiki artist but mostly he has als recorded albums in the Punjabi language. The reason behind his astonishing success is that he sings only for the poor, desperate and afflicted. His voice has a healing effect and is considered on of the best folk singers Pakistan has ever produced. He has dominated the folk music scene of Pakistan for over thirty years. He gathers thousands in his audiences whenever and wherever he performs. He hails from the famous Niazi tribe. other famous Niazi people are Imran Khan the cricketer, Majid Khan (cricketer) and Muneer Niazi (Urdu poet). He has released smash hits such as Qameez Teri Kaali, Raatan and Mahi Wasey Mera. He has become one of the most well known singers in Pakistan. In his early years, the love of his life left him for another man and he turned to alcohol, but since then he has changed his ways. When he sing a song,his face and acting is very emotional.