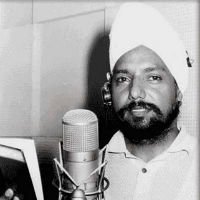 Born in Pattar Kalan (Jalandhar), Deedar Singh Pardesi started singing Folk Songs, Shabads & Bhajans at the early age of 5. He migrated to Kenya, East Africa in 1951 where he started singing regularly on the Radio and later on TV. He soon became a household name in East Africa. Deedar migrated to the UK in 1975 and in 1978 recorded his first LP of Popular Punjabi Songs "Ambi Da Buta". Deedar began singing effectively from 1952 and people are still keen to look for his golden voice and listen to him with admiration. By profession Deedar has been a qualified teacher and is now retired. Even though singing is his hobby and he has had no formal music training, he has achieved an undeniable eminence in the music world.