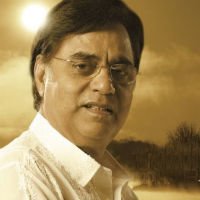 Jagjit Singh (February 8, 1941 - October 10, 2011) was an Indian ghazal singer, composer, music director, activist and entrepreneur. Popularly known as "The Ghazal King" he gained acclaim together with his wife, another renowned Indian Ghazal singer Chitra Singh, in the 1970s and 1980s, as the first ever successful duo act (husband-wife) in the history of recorded Indian music. Together, they are considered to be the pioneers of modern ghazal singing and regarded as most successful recording artistes outside the realm of Indian film music. He has sung in Punjabi, Hindi, Urdu, Bengali, Gujarati, Sindhi and Nepali languages. He was awarded India's third highest civilian honour, the Padma Bhushan, in 2003. He passed away on Monday October 10, 2011 at the age of 70 in the Intensive Care Unit of Mumbai Lilavati hospital in India due to brain hemorrhage.