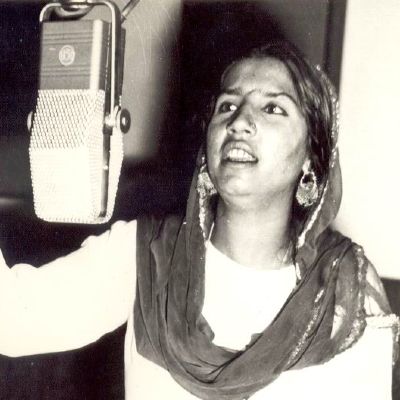 Reshma is a renowned folk singer of Pakistan, who is popular in India too. Reshman was born to a Pakkhiwas(gypsy) family in Rajasthan one year after Independence. They traded in horses, cows and goats. She belonged to a tribe which had converted to Islam. Her tribe migrated to Karachi shortly after Independence. Gifted with a melodious voice, Reshman did not receive any formal education. She spent much of her childhood singing at the mazars (shrines) of the mystic saints of Sindh. When she was hardly twelve years old, she was spotted by a music director, Salim Gilani, who arranged for her to make a recording for radio. She became an instant hit, and since that day, Reshman has been one of the most popular folk singers of Pakistan, appearing on television in the 1960s, recording songs for both the Pakistani and Indian film industry, and performing at home and abroad. Whereever she goes, she mesmerizes the audience with her husky voice. Reshman lives very simply in Lahore. She is proud of her gypsy heritage and married a man from the same tribe. Her four sons and three daughters also married within the tribe. She still loves going to the mazars, where several of her pirs (holy men) reside. She has been visiting Pir Mushtaq Hussain, Pir Shafqat Hussain in Okara for the last twenty-five years. She also visits the mazar of Shahbaz Qallander. [Special thanks to Akanksha Joshi for sending this info]