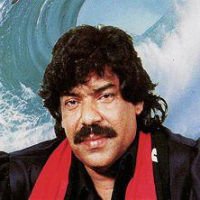 Punjabi folk singer and poet, Shaukat Ali was born in Malikwal, Punjab into a family of musicians. He received his musical training from his elder brother, Inayat Ali. He sang for the first time onstage when he was a student at Government College, Lahore. He began his career as a professional singer by participating in radio programmes. Gradually, he became popular among the people of Punjab. He is well-known for his high-pitched renditions of folk and national songs. He is also a poet who has written the lyrics to a number of his songs. Both urban and rural dwellers alike appreciate his tappas and his dastans of Mirza Sahiban, Saif-ul-Maluk and Heer Ranjha for their emotional depth. He also sings ghazals (a light classical form) with equal ease. When television was introduced, Shaukat Ali quickly became popular. He has travelled widely as a cultural ambassador of Pakistan and received numerous awards. In addition to numerous albums, Shaukat Ali has published two books of Punjabi/Pothohari poetry: Takkora and Hanjuañ De Aahalne.