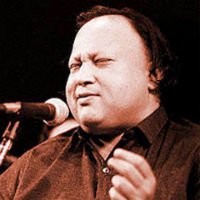 Nusrat Fateh Ali Khan was a famous and talented Qawwali singer. Hailing from a family well-versed in classical music as well as in qawwali, he became the torch-bearer of his family name. Although he placed the tradition in high regard, he wasn't one afraid of experiments. Around 1985-1990, he had realized that in order to attract the younger generation to Qawwali and Sufi music, the traditional musicians had to adapt. Nusrat Fateh Ali Khan's experiments included various forms of fusion and shortening the length of his tracks. Where a typical qawwali would take 60 or 30 minutes, he started producing them as 5-10 minutes songs—often with modern orchestra. The results were fantastic. After his passing, his nephew Rahat Fateh Ali Khan has taken upon himself to keep his style alive.