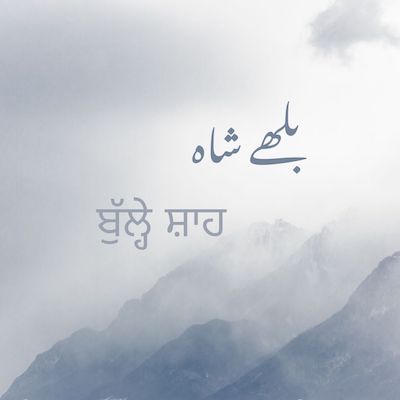 Bulleh Shah (1680-1757) is the foremost Sufi poet of Punjab and holds manifold importance. In him the pantheism of Punjabi sufism reached its apex. He was born in a Sayyed family in a village near Kasur. He became a fakir of Qadri order as a disciple of Shah Inayat, an Arain peasant and Sufi master. Major part of Bulleh Shah's verse is in the Kafi form like Shah Hussain, but he has written in some other forms too, like bara-maha and si-harfi. Love for Bulleh Shah is the essence of God. He affirms that it is a fire which is lit in the heart of man. It is yearning for return to God and is generally at the moment the individual self gets separated from Him. Bulleh Shah is acutely conscious of the differences and disputes between Hindus and Muslims and decries the persistence of both parties in their respective positions. His verses are very popular amoung the Punjabis. The reason evidently is his romatic defiance of the Muslim Sharia and an apparent condemnation of both Hindu and Muslim bigotry and ritual.