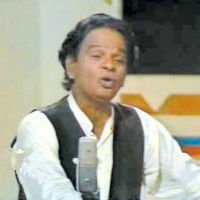 Tufail Niazi belonged to the Kapurthala music tradition and to the lineage of Saeen Ilyas. He became an internationally renowned musician and is a great name in Punjabi folk music. Tufail Niazi had a unique edge over other legendary folk singers due to his mastery over the compositions nested in classical tradition. Often he instilled new and different meanings into common verses. Tufail Niazi also had the honour of being the first person to appear on PTV on its inauguration day. He was born to a family of music lovers. He received his early training in classic singing from his father, who played the dhurpadi mardang (a form of drum). He made his first public appearance as a singer when he was only eight years old. Before Independence, he used to sing at the famous Harbalb Mela (festival) near Jullander, where the top Indian singers used to perform. After Independence, he migrated to Multan, where he began selling milk and curd until 1949, when a police inspector recognized him and arranged for him to sing at a concert. He soon became well known in the cultural circles of Multan, where he established a theatre and became a popular actor, singing on occasion for Radio Pakistan and performing on television when it was introduced. Tufail Naizi, skilled in the art of classical music, excelled in aarr (singing between the beats) and adhob (amalgamating the notes of two or three ragas). He worked tirelessly to help set up the National Institute of Folk Heritage, travelling all over Pakistan to gather folk treasures. A winner of the President’s Pride of Performance award, he died on September 21, 1990.