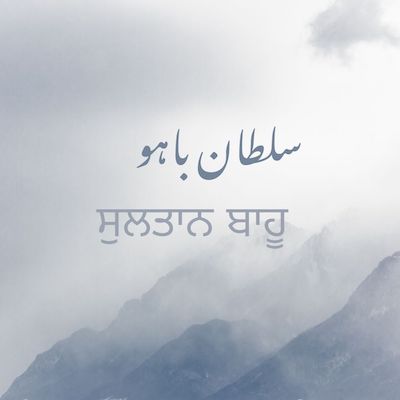 Sultan Bahu (1631-1691) is universally admitted to have been among the greatest mystics of India. His father was a resident of Jhang district. He is said to have been a person of quite a disposition and so was his wife, the mother of Bahu. Bahu belonged to the Qadri school of Sufis and was a disciple of Hazrat Habib-ullah. He is not defiant towards Sharia. The tone of his verse is melancholy. He lays stress on the Sufi formula of 'dying before death.' However, he was against the show of religiosity and piety. The most striking thing about Bahu's poetry is that every line ends in 'hu.' Hu is regarded as a name of Allah, and it is considered highly meritorious to repeat it as often as possible. Lines ending in hu are an innovation in Punjabi poetry. Bahu's verse is composed in simple and unpretentious style. It has a well-marked character of its own and rests entirely on the recources of the poet's thought and knowledge of the language. There is an absolute lack of artificiality. Another thing which is creditable about him is that his verse is pious and bereft of all human love and its ideals.